How to Perfectly Time The Market

This is the story of three friends, Tiffany, Brittany, and Sarah who saved and invested in the US stock market over the last 40 years (1982-2022). All three saved $200 of their income per month for 40 years for a total of $96,000 each. But after 40 years they all ended up with different amounts based on their investment strategies.

Tiffany, Brittany, and Sarah all knew the value of buying and holding. And they all invested in the same thing: an S&P 500 index fund. Once they bought, they never sold and always reinvested dividends. But they had different strategies about when to jump into the market.

Tiffany and Brittany were aware that the stock market could be very volatile and they wanted to avoid market crashes. It turns out they were right as there were five significant market crashes during the last 40 years as shown here:

(The recent stock market drop is not being taken into consideration as a major market crash because we are in the midst of it and don’t know if it will continue or if it’s over!) 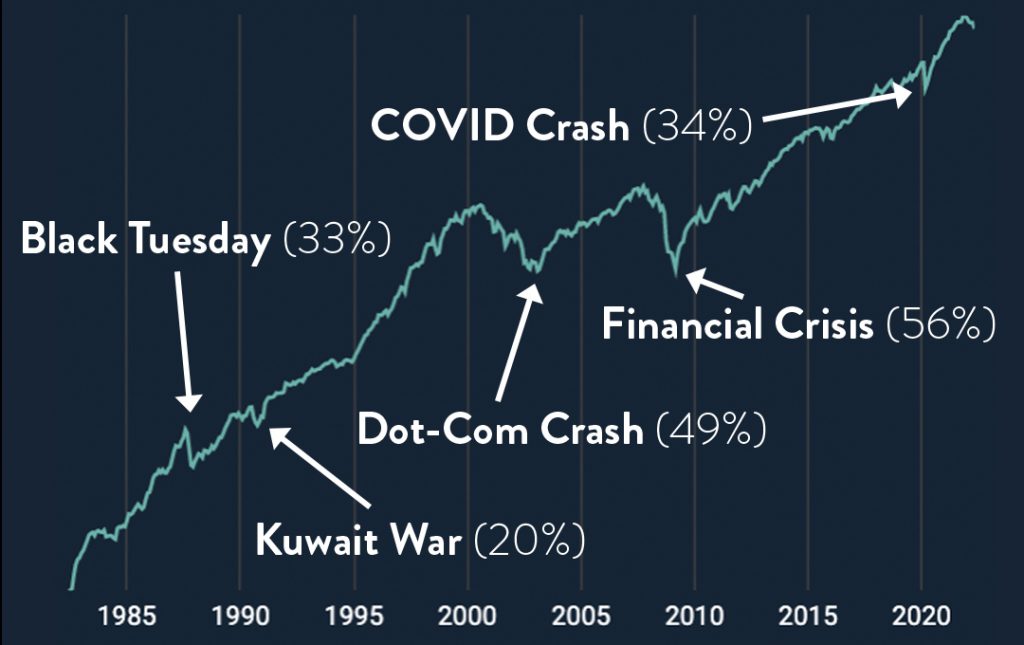 Tiffany Top invests at the top of the market

Tiffany, it turns out, has the world’s worst market timing. She saved her $200/month in a savings account getting 3% interest until the worst possible times. She started by saving for 8 years only to put her money in at the absolute market peak in 1987, right before Black Monday and the resulting 33% crash. But she never sold, and instead started saving her cash again, only to do the same at the next five market peaks. Each time she invested the full amount of her saved cash only to watch the market crash immediately after. Most recently she put all her money in the day before the 2020 COVID crash, only to see it immediately drop 34%. She’s been saving cash ever since waiting for the next market peak.

With this perfectly bad market timing, Tiffany still didn’t do too bad. Her $96,000 she saved and invested over the last 40 years is now worth $764,020. Even though she invested only at each market peak, her big nest egg is thanks to the power of buying and holding. Since she never sold, her investment always recovered and flourished as the market inevitably recovered far surpassing her original entry points.

Brittany Bottom invests at the bottom of the market

Brittany, in stark contrast to Tiffany, was omniscient. She also saved her money in a savings account earning 3% interest, but she correctly predicted the exact bottom of each of the five crashes and invested all of her saved cash on those days. Once invested, she also held her index fund while saving up for the next market crash. It can’t be overstated, how hard it is to predict the bottom of a market. In 1990 with war breaking out in the Middle East, Brittany decided to dump all her cash in when the market was only down 19%. But in 2007, the market dropped 19% and she didn’t jump in until it fell all the way down to a 56% drop, again perfectly predicting the exact moment it had no further to fall and dumped in all of her cash just in time for the recovery. In 2020, Brittany wisely waited until March 23rd to dump her savings into the market, buying at a steep 34% discount.

For this impossibly perfect market timing, Brittany Bottom was rewarded. Her $96,000 of savings has grown to $1,128,332 today. It’s certainly an improvement, but interesting to note that when comparing the absolute worst market timing versus the absolute best, the difference is only a 47% gain. Both Brittany and Tiffany have the vast majority of their growth thanks to buying and holding a low cost index fund.

Sarah was different from her friends. She didn’t try to time market peaks or valleys. She didn’t watch stock prices or listen to doomsday predictions. In fact, she only did one thing. On the day she opened her account in 1982, she set up a $200 per month auto investment in an S&P 500 index fund. Then she never looked at her account again.

When Sarah Steady was ready to retire, she signed up for online access to her account (since the internet had been invented since she last looked at it). She was pleasantly surprised with what she found. Her slow and steady approach had grown her nest egg to $1,366,329. Even though she didn’t have Brittany’s perfect ability to know the bottom of the market, Sarah’s investment crushed Brittany’s by about $240,000.