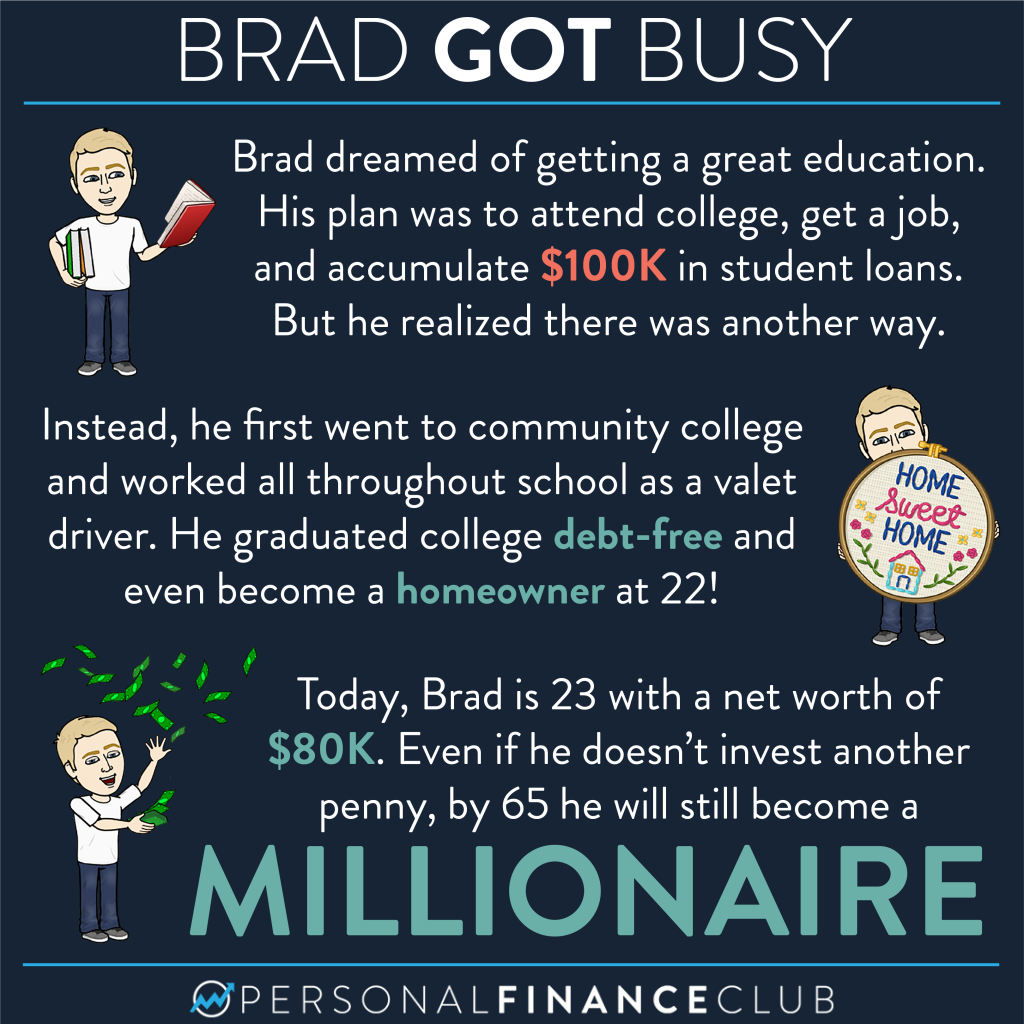 Meet Brad at @bradley_p9 . Brad dreamed of going to a great university and having the full college experience, but this was going to cost him $100K.

During high school, he picked up a job as a valet at a casino. His home state of Minnesota requires that you get paid minimum wage PLUS tips, so he was making ~$20/hour! He was sad that he would have to leave this job when it was time to move away for college.

BUT he realized there was another way. As his friends were leaving for college, Brad decided to live at home with his parents rent free. He kept his valet job and worked 30 hours a week while attending community college.

After saving up, he moved away at age 20 to finish his degree. Even then, he still did not go out and party. Every weekend, he drove back to his parents’ house, 90 minutes away, in order to keep working his valet job! He was working 24 hours a week and 40 during holiday breaks.

It all paid off in May 2020 when Brad graduated from college… completely debt free! He now has a full-time job in finance paying $55K/year and $10K in bonuses.

This past September, at age 22, he also became a homeowner! He rents out all 3 rooms which cover his $1,500 mortgage, while he sleeps in the basement. His living expenses are $1,700/month after accounting for his rental income. He drives a 1995 Saturn SW2 (pictured) that he got for $1,500.

What does Brad do for fun? He goes snowboarding in Colorado every year and travels affordably. On the weekends, he has friends over instead of going out to bars. He found a grill on the side of the road and has bonfires with a $10 fire pit from Craigslist!

On average, Brad invests $1,550 per month into his Roth IRA, HSA, and Roth 401k. Today, at age 23, his net worth is $80K! If he maintains this level of investing, he’s on pace to have almost $6 million by traditional retirement age!

Have questions? Brad is doing a Q&A in his story today over at @bradley_p9 !

As always, reminding you to build wealth by following the two PFC rules: 1.) Live below your means and 2.) Invest early and often.‎