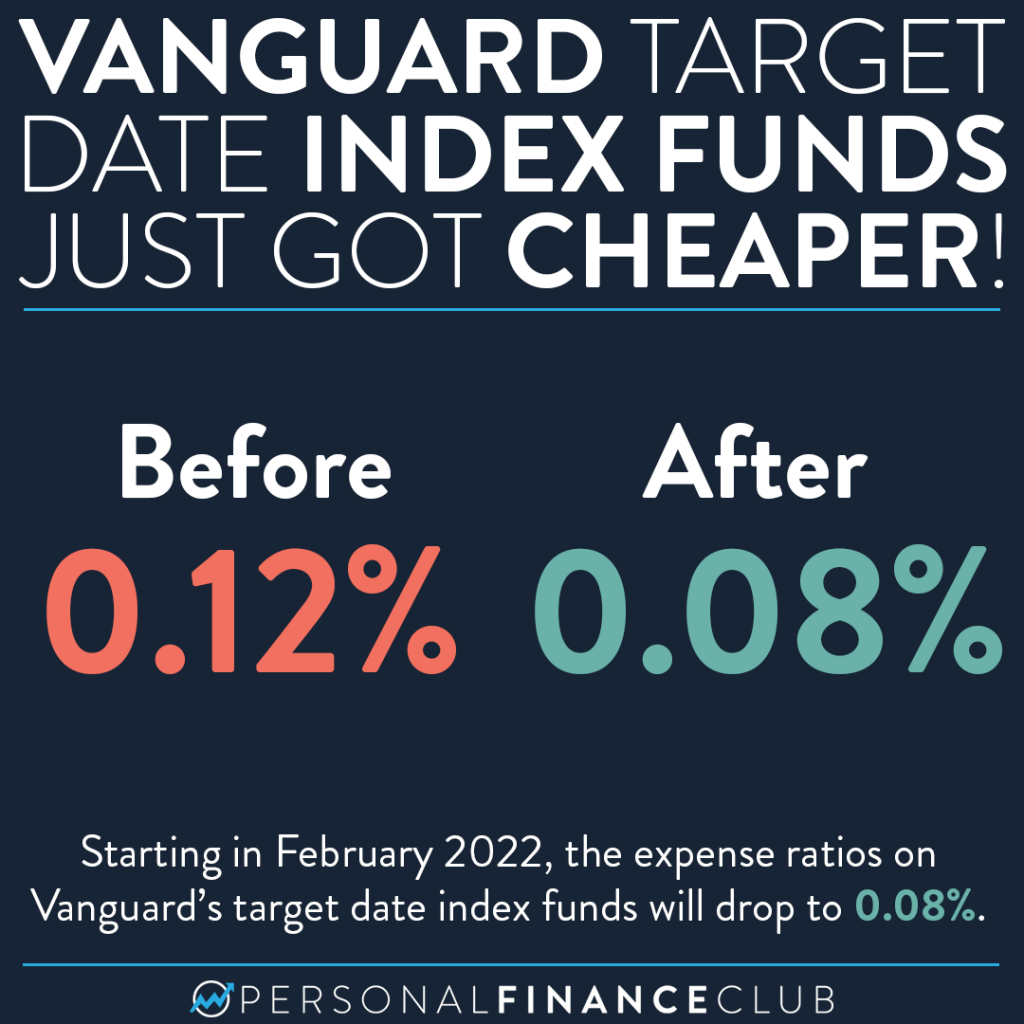 Those of you who have followed me for a while know that my FAVORITE way to invest is in a target date index fund! It’s a single ticker symbol that contains thousands of US stocks, thousands of international stocks, and thousand of bonds. They automatically rebalance and reallocate as you age. It’s the optimal investment strategy in the ultimately simple package.

WELL GUESS WHAT. They just got better. Vanguard is dropping the expense ratio on its target date index funds by a third. From 0.12% to 0.08% per year. So if you have $10,000 in one of those funds, your annual cost for Vanguard to maintain it just went from $12/year to $8/year! Nice!

For what it’s worth, 0.12% was already a very low expense ratio. Actively managed funds are generally closer to 1%, or 8X higher. But as we know, the one feature of an investment that you can look for that will predictively improve returns is lower expenses. So I’m welcoming this change with open arms!

As a point of comparison, Fidelity’s target date index funds still cost 0.12% per year and Schwab’s are already 0.08% per year. I love to see this competition pushing down prices, and I would bet that Fidelity may drop theirs too (just like when all the brokerages started offering free ETF trades in response to pressure from Robinhood).

Vanguard is also a bit different from its competitors for a couple reasons:

1. It was founded by Jack Bogle, the creator of the index fund with a mission of delivering low fee investments
2. The brokerage has a unique ownership structure where it’s actually owned by the funds. That means there are no third party owners who would benefit from ramping up fees at the cost of the individual investor.

For what it’s worth, we’ve never done partnership, brand deal, or affiliate deal with any company so I can speak freely without a conflict of interest. I personally have most of my money with Fidelity, but also have a Vanguard account.

As always, reminding you to build wealth by following the two PFC rules: 1.) Live below your means and 2.) Invest early and often.